With Source Packet Routing in Networking (SPRING), the IETF standardized an alternative approach for signalling MPLS paths, also known as Segment Routing (SR). One of the many advantages of SPRING is the ability to define traffic-engineered paths through the network.

However, a few years ago, there was no Router-based Implementation available to provision or define these Traffic Engineering paths. Some commercial controllers (like Juniper Networks Northstar) were available on the market. At that time, we came up with the question: which multi-vendor Traffic Engineering options are available using Open Source tools? The research led to a development project in which we designed our own proof-of-concept SPRING Controller which works in our XT3Lab against a demo network topology.

Let us first have a look at the traditional label signalling protocols we use today, dive into the new SPRING approach and illustrate how we implemented our self-developed SPRING controller, using Open Source tools.

Label Distribution with LDP and RSVP

Traditionally two protocols for the signalling of MPLS labels within an autonomous system are in use:

The idea behind SPRING is to envision networks as a collection of topological sub-paths, so-called segments. At a first glance, SPRING may sound similar to RSVP-TE in terms of TE capabilities, but the way SPRING signals labels within a network is very different. It follows the source routing approach, which means, that the list of segments that packets are intended to cross is encoded into the data packet itself. An additional benefit is that SPRING is not yet another protocol you add to your network. In contrast, it is a protocol addition to enrich the existing Routing Protocols, like IS-IS, OSPF or BGP with the label information required by SPRING.

Inspired by Juniper Networks case study “Using BGP-Labelled Unicast for Segment Routing Traffic Engineering” Xantaro’s SPRING controller approach evolved into the project presented below. The prototype of a SPRING Controller provides a web-UI which is utilized to display the Network Topology via an interactive graph as depicted in the image below. 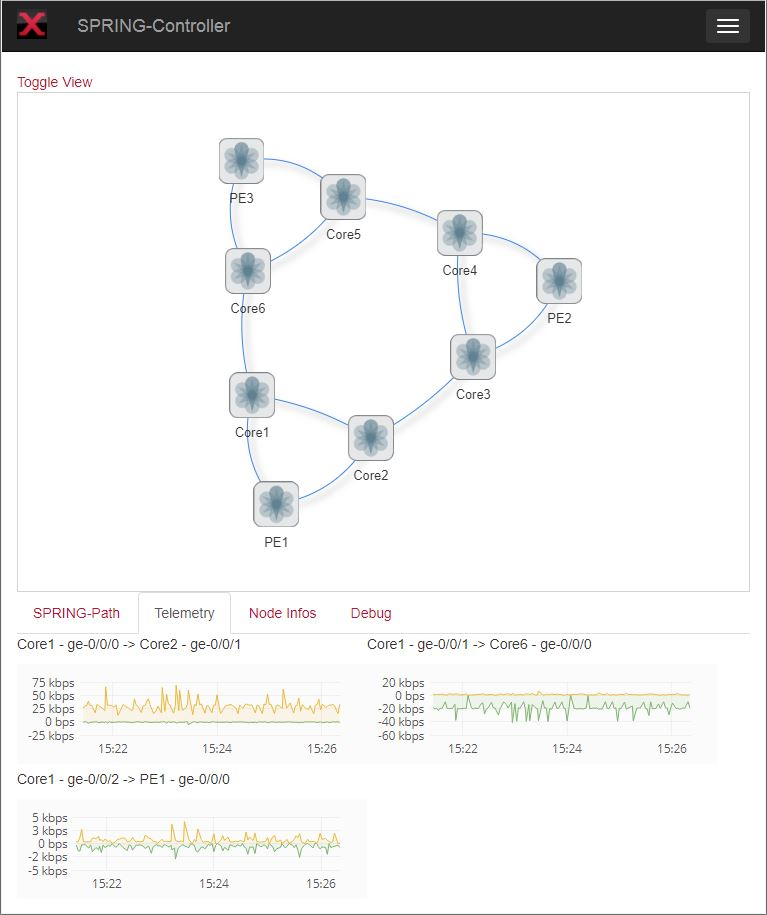 In addition to the topology display, it retrieves and displays various additional information gathered directly from the devices via NETCONF, Arista’s EOS API (eAPI) or any similar API. In parallel to retrieving or pulling this information actively form the devices, we also integrated the Juniper Telemetry Interface (JTI) as well as OpenConfig Telemetry streaming into the controller to consume and visualize real-time push-based interface statistics within the Controller UI.

Architecture of the SPRING Controller

The essential question answered by this project is which open source components can be used to form a fully functional SPRING controller. The following controller architecture provides a clear answer to this question.

Let’s have a look at the individual components:

The whole project is packaged as multiple Docker containers glued together via the docker-compose infrastructure. This approach makes the project very lightweight and simple to deploy.

As you can see in the picture below, the demo topology consists of nine Juniper Networks vMX instances. Six of these instances provide an MPLS-P ring topology (orange), and three devices are connected as PEs to that core network (green). IS-IS is used as the IGP with the Segment-Routing extension enabled. 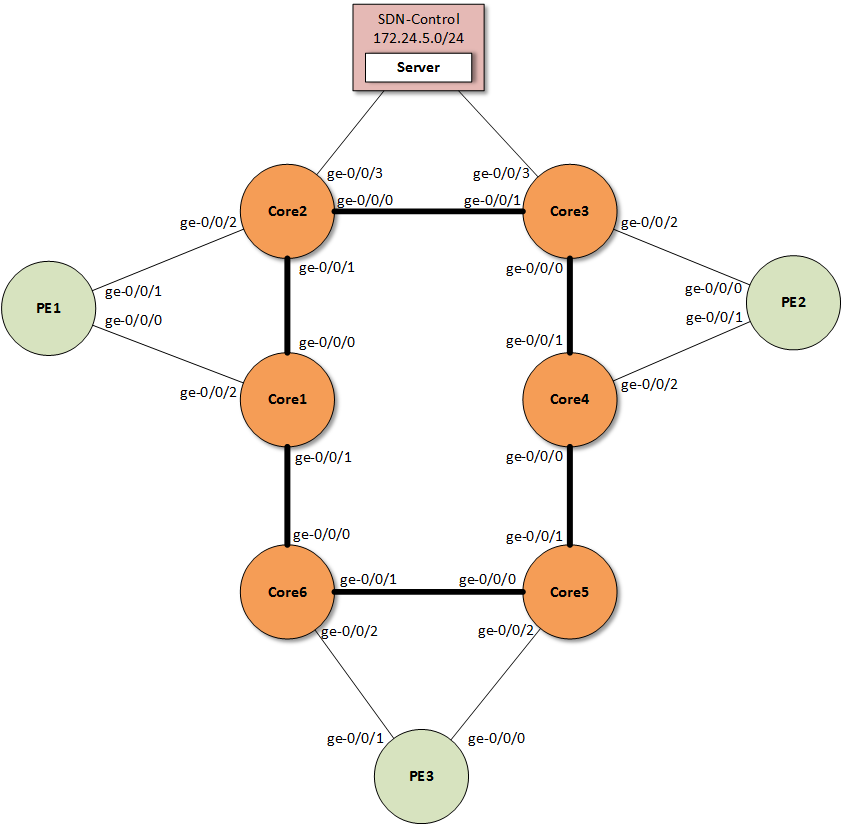 Each of the nodes maintains a BGP session with the SPRING Controller physically connected to Core2 and Core3. This session only carries the BGP-LU (Labelled Unicast) address family, which is used to announce IP prefixes from the controller to the network node.

BGP LU SAFI (Subsequent Address Family Identifiers) allows you to add additional information (MPLS Label Stack) to IP prefixes on top of what the usual IP SAFIs already provides. This label stack represents the path, which the packet has to take through the network.

The Core3 node is configured for an additional AFI, namely BGP-LS (Link-State). This address family is used to carry IGP link-state information, hence topology information within a BGP session towards the controller. Thereby the controller does not have to be part of the IGP, to be able to talk OSPF or IS-IS but receives all the information available via these protocols.

SPRING and controller in action

To give you a better insight into the developed SPRING controller and the functionality of SPRING, we have prepared a video which shows the start-up procedure, loading of live data from the network elements and how easy traffic engineering paths can be provisioned:

For further details on SPRING, its general benefits and integration into an operational network, please use the contact form below.